I am retreating into the small safe world of my quilt studio for the whole afternoon. No pandemic thoughts or tasks are allowed to enter there today! 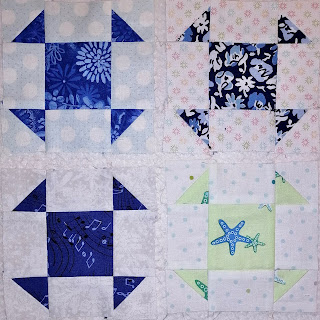 Here are the 4 Shoo Fly blocks I made this week. Each one was made from scraps from a face mask I sewed, so they are interesting fabric souvenirs.

Since it is blue month at the Rainbow Scrap Challenge, I put some of the blue blocks I've made (since last July) up on the design wall. At some point I'll have to figure out a layout, and how many blocks I'll need, but I'm not up to that task today. I'll probably end up with enough to make several quilts and that's okay too.

As is the same for most people these days while staying at home, I have been cleaning out closets and cabinets, and actually looking into places in that I don't usually notice.

I thought it might be fun to play a "what old items are in your pantry" game! Here's a cake mix that was best before either November 7, 2014 of November 14, 2007. It could be either of those. Anyone for a way past expiry date Chocolate cake?!? *snort*
Could you beat that in a contest of oldest pantry items???
Posted by Quilter Kathy

I guess we can say that you don't eat chocolate cake very often, lol. I got a box of cereal that was date 2017 and peanut butter too. Things I buy in greater number when on sale as the boys couldn't get enough of the stuff. And then the boys' craving for these food just pass. The rest is history ... like 2017 history, haha. Love your tiny Shoo-fly. ;^)

Pretty blue shoo-fly blocks, Kathy! The other day I was hunting through our hall closet and found allergy medicine that expired in 2010. Oops... It's gone now! Have a great sewing afternoon!

I found a jar of jam that I canned four years ago - how it kept getting pushed to the back of the cabinet I don't know - but you sure have me beat! I have not started my blue blocks - I need to do that soon - just got done cutting grass which took an hour on the riding mower to give you an idea how much grass I have to cut! now a cup of coffee and think about what to do the rest of the day - and maybe the next month at the rate this stay at home stuff goes

I was definitely in the running for a win at your pantry contest a couple of weeks ago. Ridiculous, isn't it?!

I think I last went through the pantry last year.... but we won't talk about the second freezer =) At least it would be after 2011, so you have me beat! Hope you had some nice relaxing sewing today.

Last time I cleaned out the pantry, I found stuff from 2008. Hubby thinks I should keep all of it, no matter the date (that's why I only clean out the pantry when he isn't around and it is trash day).

Love your shoofly blocks! I found a jar of ground cinnamon that expired in 2012! I had so many expired spices that my spice cupboard is almost empty! Guess what’s on my shopping list when we finally head back out?

LOL, I could have last year when I cleaned out my spices and found one so old that it didn't have an expiration date! Cleaning out is a good thing, I need to tackle the photos next.

I found a cake mix from 2010....I made it ..it was fine. Those expiration dates.??? My spice cabinet does need to be culled though! It’s hard to throw food away!
Your blue shoo fly blocks are soooooo pretty all together!

Your shoo-fly blocks are adorable. Hope you pitched the cake mix. The cake probably would come out as hardtack due to the leavening being so old. Can't imagine any rising. Hopefully the Easter Bunny stocked you up on goodies!