Sewing and "The Crown"

I have been sewing my way through the Netflix series called "The Crown" while working on my blocks for the Magnolia Mystery.  I am sewing these blocks on my 1952 Singer Featherweight I have called "Charity". She sews like a dream and I am enjoying every stress relieving stitch. 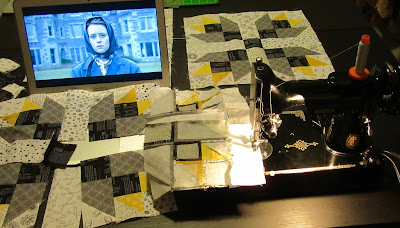 To viewers who enjoyed season #1 of The Crown, I recommend not even bothering with most of season #2. John Lithgow, who was incredible as Winston Churchill, has gone away, and there are so many new nondescript characters that are not well explained. Most of the time I don't know what is going on, and need to rewatch parts of the episodes, then google historical facts so that I can figure it all out. That is not good storytelling when I cannot follow the plot!
Also, much of season #2 is about the sexual escapades and immoral behaviour of the prominent men and of Princess Margaret. The storytelling went from sublime in season #1 to terrible in season #2. 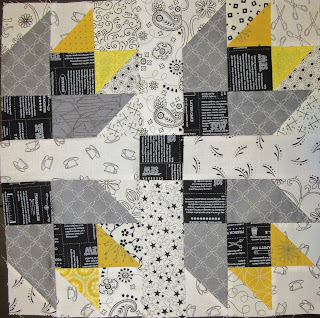 How does that happen?!?
I fast forwarded through some parts of the episodes that are not my "cup of tea", and got so annoyed that I started making sewing mistakes.
That is not a good thing! Okay, where's the seam ripper, and what else can I watch on Netflix?
Any suggestions?

I've also been disappointed with season 2. I'll be interested to see what shows others suggest. We just finished Mad Men before starting season 2 of the Crown and enjoyed it.

Oh, that is too bad, I really enjoyed the first season and was saving the second for after the holidays. But for something fun and funky, see Samauri Gourmet, it is a hoot, but it is subtitled so you can't sew and watch at the same time. Definitely see the Christmas Candle before the holiday, it is wonderful. I know there are other things I have enjoyed, but I cannot think of them right not, not enough coffee yet.

That is a shame about season 2 and resulting stitching goofs. The producers think the ratings will increase. Instead they are trash. You have chosen great low volume black and white prints.

very creative block:) I haven't watched the crown.I am watching Highway to heaven which is lame but safe.

One of my favorites is The Great British Baking Show. I also enjoyed the Father Brown Mysteries, the Bletchly Girls, and Madame Secretary. Call the Midwife, of course, but I think you were watching that? I would have to agree that Season 2 of The Crown was a little over the top with Margaret's affairs. We just finished the season.

I watched the first season of the Crown but towards the end I wasn't liking it too much so thanks about letting us know about the second season.

I don't have Netflix, but, I'm watching all the seasons of Bewitched currently.

Have you seen Call the Midwife? And I see there's a series called Land Girls (WWII era) but haven't watched it yet.

I finished watching The Dr. Bleak Mysteries a month ago and enjoyed it a lot. Paranoid is a good one, it's a little quirky but you might like it. I loved Stranger Things which is like a cross between X Files and the 70s. I like Westerns! Longmire is a modern cowboy-type sheriff. They just finished their last season; I think there were six. I binge watched these! The British Baking Show is so much fun and I found I could half watch it and do just fine. Good luck on your sewing and watching. I understand your stress relief through quilting; I love that part of it.

One of my favorites has always been Midsummer's Murders. Loved watching those shows, and Broadchurch.

watching Doc Martin...enjoy the beautiful scenery! Same goes with
the remake of Poldark

I watched my way through all of Grey's Anatomy. Now I have to wait for the next season to come on Netflix. Call the midwives was a good one.

And I thought it was just me...I decided to limit my viewing to one episode every couple of days to stretch out the season, but I find I am not really missing watching it. For a silly, easy watch, I like Republic of Doyle on Netflix.

I'm sad that it went to Netflix. I liked Longmire on A & E. It's a bit racy too, though. Glad I didn't see Season 2 of the Crown after your review. Waiting for Call the Midwife on PBS and Hallmark Channel's When Calls the Heart on Christmas Day! I had to use ol' jack the ripper today too.

You have a nice little setup for sewing and watching. :)
I don't have any paid TV channels, or Netflix, but have enjoyed The Great British Baking show on PBS. I like Father Brown, too--and Death In Paradise.
My brother and his wife are having my Mom over each week to watch Poldark, and they are all enjoying that one.

I do the same..set up something to watch while stitching. We are at episode 3 in The Crown and you are right, it isn't as compelling as Season 1 but there are 6 seasons planned so it may get back to the initial wonder.
Doc Martin, Longmire, The Ozarks, Doctor Foster are all shows we've enjoyed.The Great British Baking show is wonderful and isn't there a Canadian version of this?

You should watch Alias Grace on Netflix. It's a 6 part series, kind of like historical fiction, based on a real murder long ago. There are a lot of quilts shown thruout the series. I loved it.

i couldn't even get thru series 1...try longmire...

Oh no, I had high hope season 2 would be just a continuation of the first, bummer.
that is a sweet name for your featherweight.

How in the world you can SEW while watching The Crown I do not know, lol. I screw up sewing when I have my full attention on it ! :)

I am enjoying the second season ! Some of it was fascinating to me...yes the Princess Margaret plot is a bit racy but I'd forgotten what-all went on with the Suez Canal. Elizabeth and Billy Graham had me googling about their friendship which went on for decades. What she did with the Ghana situation against all advice was just ingenious and masterful...I just finished the Jackie Kennedy episode / only a few more and I'll probably watch it all again, lol

The acting is amazing. And just as with Downton Abbey I am starting to talk to myself in a British accent. It'll wear off soon :)

lovely blocks! I love the crown but have to really watch it, I can't follow along on this show while sewing as I was to look up how true the facts are....