I enjoy very step of quiltmaking except sewing on borders. I really dislike the measuring (and the wide variations of those measurements!), the figuring, the time spent pinning, then struggling and pulling to get the border strip to end at the same time as the quilt top when I am sewing the two together. In fact I try to avoid these steps, or at least minimize the pain by just making one quick and easy border. I admire those of you who make multiple and/or complex pieced borders that always seem to lay flat.
But sometimes, when you have a stack of UFO's that just need borders, you

have to just force yourself to get 'r done!! So, I am bribing myself this weekend to get the borders on at least two projects. I bought these beautiful cherries at the market (and hid them on the kids) and they were my rewards for tackling the borders. Yum yum!!
First I tackled the smaller project - the Kwik Scrappy Star. I got all the blocks together easily and was chiding myself for all the fuss I made about 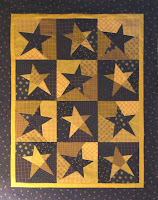 piecing the blocks in the first place (read about it here) since they came together just great. I decided to go with a 1" inner border and 3" outer border. The borders weren't too hard to deal with, except for a ridiculous cutting mistake that made me piece together the top and bottom gold borders. Now I just need to buy some quilting thread and this will actually be finished in record time (less than a year !).
While enjoying that feeling of success, I moved on to the OC, which is about a thousand times bigger than the star quilt! I worked out that the amount of black fabric I had leftover would allow me to make a 1.5" inner border. I sewed the side borders on with the quilt top on the feed dogs, since I knew there would be some easing

in to do! But that resulted in not being able to see where the seam was coming through the pieced blocks and I sewed over most of the block points. Ugh! I really don't like that. So, today I am doing the frog stitch (rip it, rip it) and taking off those borders and sewing them on again, this time with the borders on the feed dogs and the quilt top where I can keep an eye on it. Wish me luck...the cherries are all gone!!
Posted by Quilter Kathy

I'm with you. Borders are boring to put on! Just a long boring seam instead of the more fun, short seams on the blocks. And so frustrating if they turn out wavy!!

Kathy, on the big borders, are you pinning the center and the quarter-way points as well as the beginning and end? I am SO not a pinner, but I find it easier to ease between the pins 1/4 or even 1/8 at a time. Makes that last quarter of the border strip much less stressful!

I know there is a school of thought out there that we should cut borders on the lengthwise grain to help "corral" the quilt blocks. I prefer to use the crosswise grain so that if I do need to ease, I have that little bit of extra stretch when necessary. Of course, that means that the measurement of my quilt's edges need to be in the same neighborhood!

The alternative that I can see would be to pin every point that you want to hit at the seam allowance distance/point and aiming for the needle while sewing on the border side. Hope this makes sense.

I don't have any helpful suggestions, as I seem to do my borders all wrong(just sew and cut off the excess, I know it'll come back to bite me one of these days), but I would probably try something crazy like sewing a second line where necessary and blending it in, probably doesn't make sense and it probably wouldn't work, but that's also probably why I don't have any masterpieces. Anyway, I just wanted to say that your little star quilt is adorable, I love the colors and the pattern and the borders. You deserved the cherries.

Oh, I do like the personal reward system . . . and what could be better than cherries? You'll have that second quilt bordered in no time at all *s*

Funny you should post about borders and frogging. I did a bit of frogging on a border yesterday. I cut the border .5" too long which resulted in fluttery edges. Sigh. It is all better now, tho. The personal reward idea is genius!

Ditto! I actually finished a quilt yesterday and just didn't put a border on it at all to avoid it and get something out of the UFO mountain! Worked for me and it's finished!
Regina