The focus of my sewing time should be the "Oh say can you sew" mystery blocks. But when I was cleaning over the weekend I came across my bag of waffle blocks and became obsessed with them again. Squirrel!

This is a typical photo of my work table - 2 projects being sewn at the same time. One project that I want to finish and am slogging through, and one project that is fun and distracting. 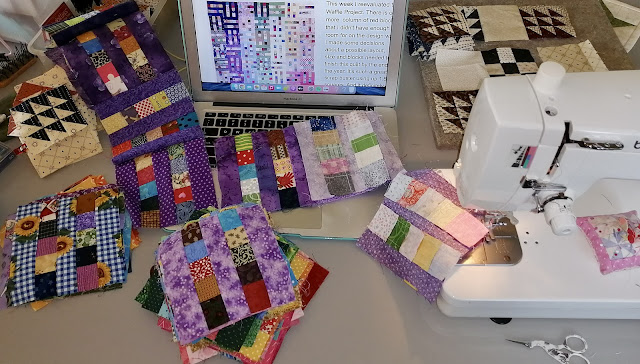 I was looking at one of my waffle blog posts and trying to sew the blocks together according to the photo. Then I realized that the pile of blocks included many blocks that weren't in the photo layout. So I ended up putting all the blocks up on the design wall, and rearranging until I was happy with the layout.

Here are the waffle blocks sewn into columns. 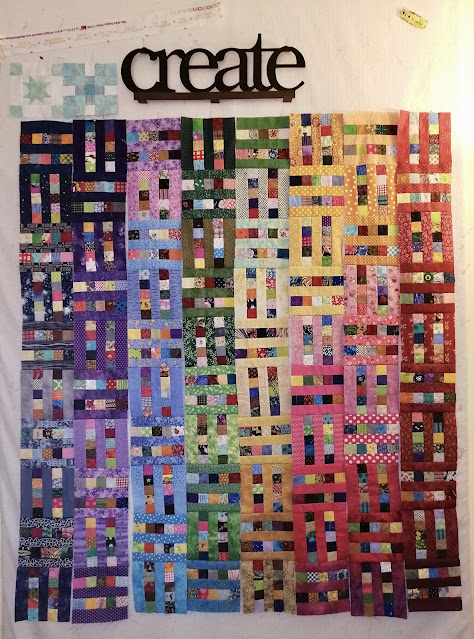 I love this photo of scrappy waffles on the design wall! It's well on it's way to becoming a quilt top!

Thanks again to Nann for the inspiration for this project. She has made several waffle quilts which inspired me to make my own.

Don't even ask about the "Oh say can you sew" blocks! They are suffering from neglect at the moment but I have until the end of the month to get them sewn :)

Linking up to Design Wall Monday at Judy's

I love these waffle blocks!

Wow! They look terrific! I love how you placed those colors.

Beautiful! I love your color placement!

I havent done any waffle blocks yet but they look intriguing. I often sew blocks for two projects at the same time as well, itvalways seems a good idea go me too!

Love your waffle blocks. Yes, they are super fun to sew and addicting. Your layout is gorgeous. I just finished a waffle block crib quilt in blue and have a pink one on the frame. I need to get that quilted soon so I can have a finish. My squares were 2.5". It looks like yours are smaller. I kinda like the smaller ones. Lord knows I have enough 1.5" squares and strips...

Looking good, I need to get out my Portable Design Wall. It's not easy to set up. Rhododendron Trail quilt needs to get finished before Mystery Starts. Squirrels are abundant here.

The waffle blocks are fabulous, Kathy. I can see why it grabbed your attention. Happy quilting.

That is awesome!!! What a fun and colorful one!

I love how you lay out the blocks in a rainbow effect.