I finally decided (way past the deadline to sign up for One Monthly Goal) that in August I would finish my 2020 Quiltville mystery called Grassy Creek. I had been fussing around since the end of January trying to decide about the border, and impulsively decided I'd had enough of the indecisiveness and declared the quilt top was finished! 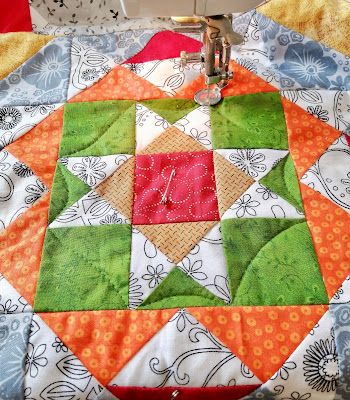 I made 12 blocks for my version (instead of 25) and each of my blocks has a different green, orange, red and gold. I decided to just quilt curves and change colours for each block. I started quilting the green curves and did all 12 green patches first, then orange, then grey, then gold. It was a lot of stop and starts, but it was fun and that's how I like to do my quilting :)

I did not string piece my sashing blocks, so my sashings are a plain piece of grey. 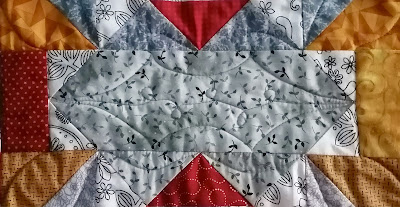 They seemed a bit puffy with the initial curve quilting, so I added a line of loops through the centre of the sashing to smash them down a bit. Much better.
Posted by Quilter Kathy

Great to get it finished before the end of the year. Ready for the next mystery

Such a bright and happy quilt! Good to have it done before the next BH mystery starts, because we all know, you cantresist a mystery quilt! LOL!

Well done, Kathy. I believe it was from you that I learned to make Bonnie's mysteries my own way--choosing my own number of blocks, my own setting, and most importantly, replacing string pieced blocks with a solid piece of fabric!

Looks terrific! That is a lot of stopping and starting, but I find I’m happier with that extra work when it seems the best design in my mind!

You have a beautiful quilt, I do love Bonnie's mysterys.

Beautiful! I am on step 4 or 5. I really should pull that out and get it moving along again.

Such a beautiful quilt and lovely fabrics. A great one to focus on this month. Happy quilting

Beautiful quilt. It looks great without a border and you have plenty of time to get the binding on before the end of the month.

Looking great, Kathy. One less UFO is always good for the soul. ;^)

That is looking so good. August seems a good month for working on UFO's.

Congrats on making a decision and getting started on the quilting, Kathy!