I have been making progress on the bear quilt this week. This quilt started last fall in a quiltalong over at Sew Fresh Quilts. I was just going to make a small wallhanging but it is growing into a full size camping quilt inspired by a bear incident while camping last summer. 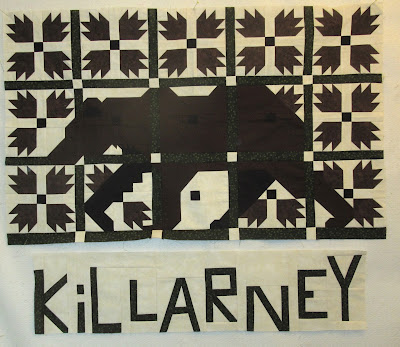 The letter blocks (of the name of the park we were camping in) are sewn together, although I think the L's need to be a bit closer to each other so I'll fix that. More bear paw blocks will be made this week to add to the top and bottom of the quilt to make it bigger. And the next borders are being calculated.


One of my ideas was to incorporate some sausages into this quilt because my 2016 bear encounter occurred when I was cooking a sausage supper for 10 hungry campers (mostly famished teenagers) on a Coleman stove.
The bear and the hungry family, just returning from a long hike, both wanted the food! The nearest store was more than 1/2 hour away (total of 1 hour to get more groceries to restart the cooking) and at this very remote store the cost to buy only 5 sausages was $25! So you can understand why I was determined to not give the bear our food!
I remember thinking "he's a fairly small bear, I'm sure I can convince him to go away". I was actually thinking about challenging a wild bear! Thankfully the screaming of everyone on the camp site while they escaped to the vehicles scared the bear away and I didn't have to physically defend the sausages. But I was at the ready, and did not intend to leave the stove/food!

The bear quilt definitely needs some sausages don't you think?
However it's difficult to create fabric sausage blocks without them looking... ummm... phallic. My practice blocks were so terrible I'm not even going to post a photo of them. It turned out to be difficult to track down some sausage fabric. But my quilt friends came through for me and tada...  2 different sausage fabrics arrived from my friends!
Should these be part of the main quilt, part of a border, or pieced into the backing? I'm waiting for the bear (or you!) to tell me what to do!
Linking up to Let's Bee Social!
Posted by Quilter Kathy

The novelty idea is clever, but in this particular quilt, I think it would detract visually. Perhaps you could incorporate on the back,

The bear and I think the sausages should be on the back of the quilt. Putting them on the front would be too tempting for the bear...

Sounds like a scary encounter, but what a great story! It's a fun quilt. I'd put them on the back too, as part of the label perhaps?

I think it would be funny to make the bear paw block directly under the bear's mouth out of the sausage fabric!!! Then use it on the back. What a hoot!

LES is More has a great idea. Just one bear paw in the darker sausage fabric would tell the whole story.

Its a good story to make a quilt to relive it. Depends on how small the pieces will be in the border...

Les has a good idea, but I think it's all sewn already, isn't it? I think there should be sausage somewhere on the front, though, since that's the story. A bear claw block made from that black/red fabric and your background fabric would look pretty good, I think. And since the bear ran away, you could put it anywhere on the quilt. Maybe it could even be a whole row!

I'm glad to hear more of the story. I'd still like to hear the song!

I love the graphic quality of this quilt with only the two colors. I would definitely keep sausages on the reverse side. Maybe add some pictures from the trip to the back too. Years from now, your grandkids might like to have the story on the back too.

Hi, Kathy. Great story. So glad it ended well! Because of the colour of the gifted fabric, I would use it on the back, maybe as a frame around the label.
Christine from Ontario

Put them on the back. I haven't touched my Bear Paw blocks since last fall.

Great story! I'd use the fabric in some of the blocks.

Not sure the sausage novelties will blend with the graphic simplicity of the bear and his background. Perhaps you could represent the encounter with campfire flames instead and let the sausages be imagined.

Part of the label on the back

Maybe use the novelty fabric for the square part of the bear paw block and put the black triangles around it, same as the other bear paws. Make one like this and see what it looks like. There’s enough black in both of the fabrics that it might not be as overwhelming as it looks before it’s cut up.

Do what makes you happy! Of course I love the idea of one bear paw block of the novelty fabric!

What a great way to commemorate the camping experience!

The way I see it is that this is a quilt for camping, and it commemorates an experience you had while camping. Not going to hang in a show to be judged on how well the fabrics work together. If it was mine, I would put the sausage fabric in the front--under the bear's nose. It is the visual punch line to the story the quilt tells. I like Cathy's idea of using the sausage fabric for the square part of the paw, with the points in the black. So you have to unpick a little to switch out the blocks. Worth it, IMNSHO! : )
Now--do what YOU want!

If it was my quilt the sausages would go on the front where you have the rest of the story! What a great camping quilt no matter what you do!

I would probably use the fabric on the back or even the binding. I was thinking more along the lines of sausages and smoke for the quilting pattern.

I would use it either for the whole backing (if you have enought fabric) or as a big frame for the quilt label. Btw great story!

Love the story and the sausage fabric more than the hot dogs. I would use it on the front of the quilt...sash between the words and the bear and maybe all around border too.

What a great story! The sausages should definitely go on the back. Love the bear paw so far!

It is so cool that your bear paw quilt has a bear at the camping adventure story to go along with it. The bear never did get the sausages and I believe you would have done your best to defend them if necessary. Let's hope you never have to prove it!

Great quilt with a good story. I think the sausage fabrics should go on the back with a label telling your story.

what a great story. I usually put fun fabric on the back of my quilts. I love that you actually found sausage fabric!

lol! Glad the bear ran away without too much provoking! But, what a memory! I like the simple block style of the graphic of the bear and name and think that a novelty print would stand out too much on the front. So, pieceing some of that sausage fabric into the back would be the perfect solution?