Saturday is my weekly Rainbow Scrap Challenge update and the colour for July has been dark blue. Many of my scrappy projects already have enough dark blue so I have added a few blocks to some newer projects. 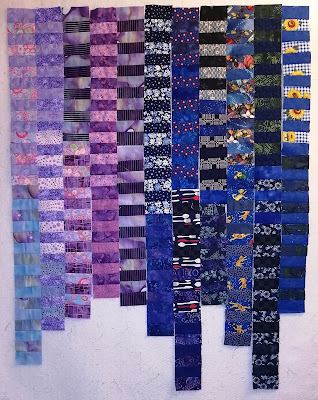 I added some ladders to my version of Bonnie Hunter's Bitcoin pattern. This is a new project and the pattern was just released in June. It's an awesome way to use up scraps and strips in the RSC colour each month. 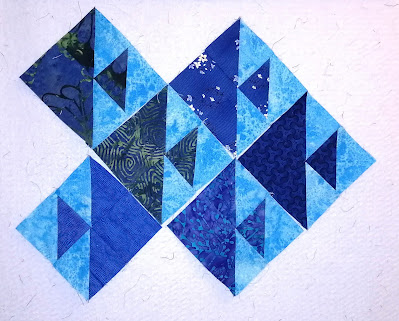 And of course I jumped into (or should I say dove head first into) the Fish School leader - ender challenge that was just announced in July. Here are a  half dozen bluefins on the design wall. One fish does appear to be swimming upstream!

Linking up to the RSC party at Angela's

Well done with fish school. I have cut out quite a few blocks and have yet to start sewing them

Very pretty! I'm so tempted to play with Bitcoin myself. It really appeals to me.

Both projects are looking awesome, Kathy!!

There is always one adventurer in the group!

I like both the bitcoins and the fish! They're fun in dark blue!

What fun projects you are working on , Kathy. Love the blue fish. Have a great weekend

One fish two fish what a lot of blue fish! Bitcoin is calling to me....the quilt pattern, that is (I bought it), not the cryptocurrency.

There is always one fish that needs to be different! Lots of pretty blues being worked at your house.

Lots of lovely blue scraps being used in those blocks. Well done.

I've been debating about Bitcoin. I didn't buy the pattern when it was released & on sale, but the more I see people making it, the more I like it. I may have to get it. Same with the fish. I wasn't really inspired at first, but your fish are totally awesome!

Looking good! I too have loved all the Bitcoins I've seen and probably should've bought in also. Then I say to myself that I really want to play with strings and talk myself out of Bitcoin. Hahaha! Your school of fish look great. I usually play with the L&E Challenge for 2 years because it takes me that long to get a nice size. That means I'm still playing with Easy Breezy ... at a snail's pace! Haha!