I'm a little late posting my mini Table Scraps challenge for May. The RSC colour for May was red, so I rummaged through the UFO box and found a house block that was primarily red.  I think it was started for some kind of challenge and then it was abandoned when it didn't turn out as I had envisioned. Basically, I hated it! LOL

Just look at that weirdo applique tree which I'm sure must have been the challenge fabric. 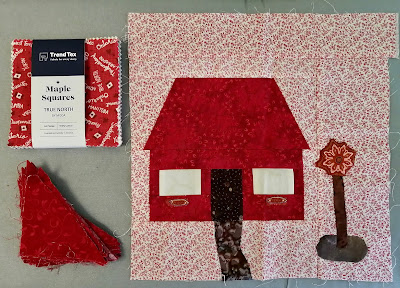 I decided to combine the block with a charm pack for this month's  placemat project. I also found some gifted red triangles, and dove right in to creating something. 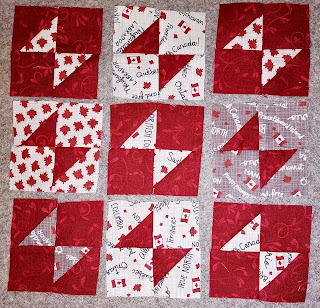 First I sewed these sweet little blocks using the Canadian themed True North charm squares with the red triangles. The 20 HST blocks finish at 1.25" and are my favourite part of this project! I sewed the blocks together for the side borders which gave the project the rectangular shape I prefer for a placemat. 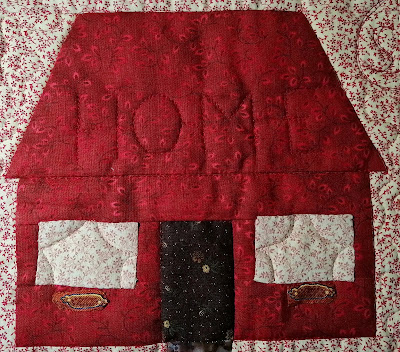 Then I had to fix the windows in the house since they were too stark. I appliqued a tiny print fabric over both windows (and later quilted some curtains).
Then I pin basted the quilt, batting and backing...
and the quilting fun began. I machine quilted the words HOME Sweet HOME in the background and on the roof, and then stippled the background space.

It turned out much better than I had anticipated! 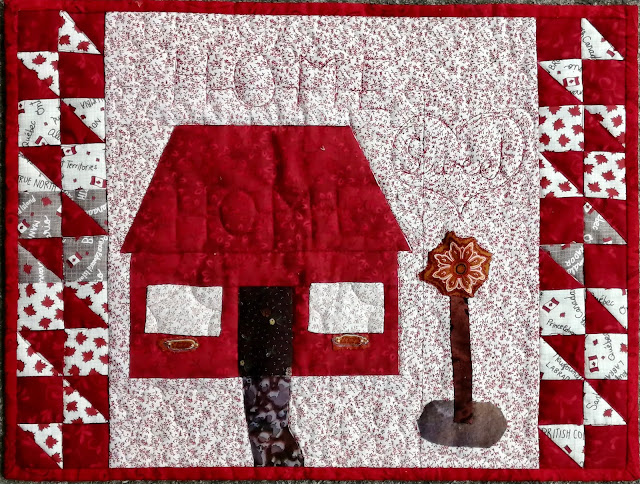 Linking up to the May Table Scraps Challenge  and the Constant Quilter monthly mini projects.
Posted by Quilter Kathy

Good use of your orphan block!

I think it looks really cute Kathy. Great way to give an old forgotten block, a new lease on life.

Creative use of an orphan block and little pieces most quilters toss out.
Pat

It came out great! Love the addition of the home sweet home.

SEW sorry you missed the May Link Party, Kathy! Nice job on using up that RED orphan block. Smart choice for your entry (and you are welcome to add it to the June party at the end of the month, if you'd like!)

Such a sweet table mat, Kathy and love how you have the words quilted in the piece. I never can resist a red quilt. Happy quilting

You did a great job on this project! Such a pretty group of reds!