I fell a wee bit behind in the block making department lately. I became enamoured with a Halloween project that I will post about tomorrow. But now I'm back on track and getting organized with the blocks that need to be finished. 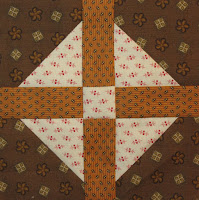 I am almost caught up with the Blockhead patterns being posted on the Moda blog.
This is block #31 called "Dot Dash". 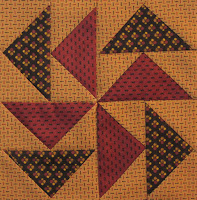 This is block #32 called Dutchman's Puzzle which is basically 8 flying geese blocks. 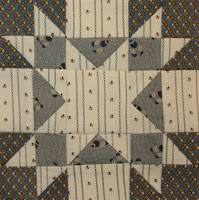 And lastly this is block#33 called "Starz".

Block #34 was just posted this week and it's an adorable house block that I have just started to prep for hand stitching.


Now that I see my 33 blocks together on the design wall I think this blue Starz block stands out too much. There are blue fabrics in other blocks so I don't know why this one bugs me so much! Should I make more blue blocks or remake this one in a different colour? 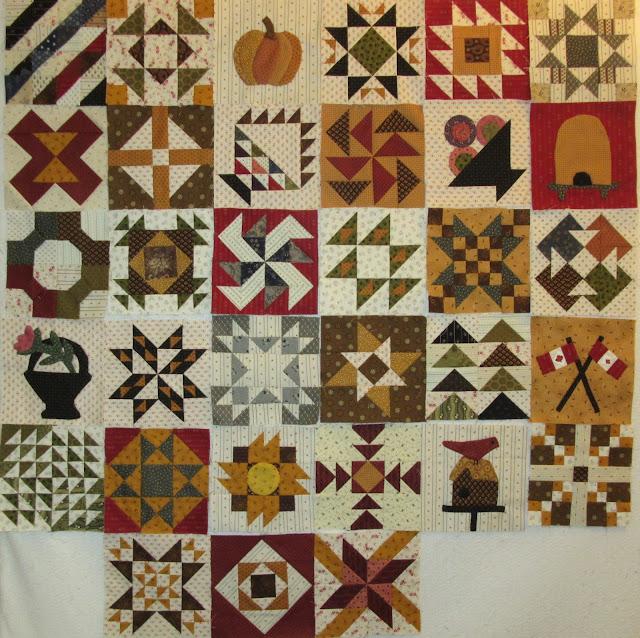 It's a fun assortment of blocks. If it bugs you, I'd add in a few more touches of that blue gray colorway. You've got some green in a couple of places, maybe add in some more of that color as well?

I'm regretting that I didn't start making these blocks from the beginning, and I'm not going to try to catch up now! Haha! I might make the current block, though. That little house is too cute! I wonder if that blue block bugs you because it's a lighter intensity than the other blocks. I agree that if you add in additional blocks in that fabric, it might work out. Or make another block that works better and use the blue one in the backing? Just a thought.

this will be such a beautiful sampler piece; i love the little applique blocks along with the geometric ones--makes a nice array and your color choices are great heartwarming look hugs, Julierose

I think they all blend quite nicely!

Personally, the starz block doesn't stand out to me at all. It adds a bit of variety and highlight. It is such a lovely block that I would not leave it out. If you feel it has too much contrast, I vote to make more blue! Xoxo

I didn't think the block stood out, but I know photographs don't always show true color. You have had kind of a warm, Fall-ish color scheme going on, and maybe in true light this block doesn't fit in well (looks fine on my monitor). If it is going to drive you crazy, introduce more of the blues, or remake it--whichever you think would settle the matter for you.

Personally, I like the blue/gray color addition, and would add a few more of these blocks to balance.

Goofin' Off Around the Block said...

I like the addition of the blue and gray block. I do agree that maybe you need another block or two using the same blue and gray colorway to balance out the quilt. It will look great either way. If you hadn't mentioned it, I probably wouldn't have noticed anything.

I recently had a the same problem of a single block standing out and it bugged me so much that I unpicked it and put in one that I liked better. :)

What a great bunch of blocks! I love them! The blue block doesn't bother me at all. But it's your quilt. Perhaps you'll feel differently if you add a few more using that color.

Oh wow, they all look fantastic!