Endure it or burn it? 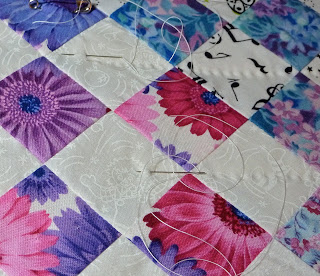 I have read several blogs this week talking about the process of quilting and how they deal with each of the stages of creating a quilt. I wrote about my own struggles recently in hand quilting an older UFO that I named "the sad quilt" (click here and here if you missed reading about that). I finally decided that I was done with enduring that quilt. I needed to put that UFO back in the closet and work on something more uplifting. And I cannot believe the change in my mood when I'm quilting now.  I am eagerly anticipating every spare minute to hand quilt some stitches in my 36 patch quilt along project and revel in every stitch.
But never in all my ponderings about how to deal with challenging quilts and UFO's, did I ever think of the solution that Leah Day came up with! Did you see the blogpost on her her "Sinkhole Quilt"? Click here to be amazed! Very powerful and moving, with great insights to reflect on, about all challenges in life, not just the quilting ones!
What are you enduring in your creative challenges?
What do you need to burn or put leave behind? Just do it!
Posted by Quilter Kathy

I think we all have intentions of finishing a project when start it. We're excited, smiling, etc. Then after you go along the doubt creeps in about the quilt - could be the fabric, could be the design/pattern, could be who you thought you were going to give it too.....One never knows where a project will lead.

That being said I'll share that when I first started quilting I was working on a log cabin quilt that I absolutely detested. I thought I HAD to finish it; so I got it to the quilt top stage and couldn't stand it. There was something about that quilt that caused so much angst in me. Rather than giving it to someone that would probably love it - I couldn't even do that - no I spread it out on the cutting table and proceeded to slice it up with my rotary cutter. Yes, that's exactly what I did and you would not believe how much better I felt when all the pieces were in rubbish container. Out of my life never to be seen again. It was such a euphoric moment!!! :-)

I saw that post and my jaw dropped! I could not imagine doing that to something that took so much time and energy. I have gladly given away quilts and shrunk them or repurposed the blocks but burning it? I don't know if I could!

I think I would have to pass it on to someone else before burning. But we have to do what works for each of us. : )

I usually finish my projects. I had a machine applique, hand quilted queen size quilt that took over ten years but I was so happy that I completed it. I wanted to make a quilt back in the eary 80's but life got in the way and when we were moving state to state once I donated the fabric to good will, still sorry I did that! Can't imagine having a burning, but we need to do what works best for each of us.

I used to have a treadle machine. I loved it, but didn't have room for it when I downsized. When I got it, it had a really hard, ratty leather cord on it. I went to a sewing machine repair shop and the guy had several new cords in stock. He told me how to adjust the new cord for my machine. I took the cord home and the machine worked beautifully. My husband even made slipcovers on it!

I don't think I could trash a whole quilt top, it would have to go to charity. But she does give you a lot to think about.