I am back from my 3 day quilting retreat. I sure had a great time at the retreat...did lots of laughing, visited with old friends, enjoyed yummy food (for which I didn't have to plan, shop, cook or do any dishes!!) and revelled in the seemingly endless time for sewing. I always learn a few new tips and get re-energized about quilting when I see all the beautiful projects that everyone else is working on. 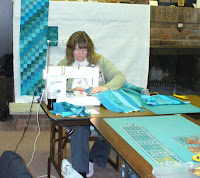 I brought a pile of teal scraps and fat quarters that were donated to the charity quilt program at the guild. I don't have any teal fabric in my stash and have never made anything in teal, so I thought this would be a good challenge for myself. The first evening I cut the 2 1/2" strips to make the scrappy bargello quilt on the Quiltville website and started to piece the strip sets. This is a photo of me sewing the second strip set....the first pieced panel is behind me on the desig 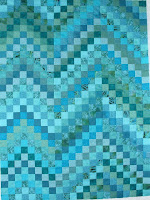 n wall. That was a fairly boring job, but made fun by the other quilters comraderie and encouragement. I didn't have enough fabric to make the pattern as shown on the website which has 4 panels, and I had to do some piecing together to get enough squares to make it 3 panels. It turned out okay, but by the second day I was really
hating teal even more! 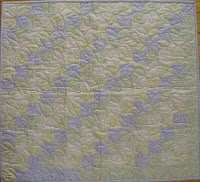 When that top was finished I got out an old UFO, which is a small quilt for the Memory Quilts program at the guild. I had pieced it years ago, and it was quilted by Ruthanne Finnegan. After I sewed the binding on, I hung it on the design wall with a note asking if someone was willing to hand sew the binding down. Miraculously it was a finished quilt within the hour! Don't you just love binding fairies?!?! The finished quilt is on the right.
Then I had a real change of gears and opened up a new miniature paper piecing pattern, which was a gift f

rom my retreat roommate. She thought it would be a challenge for me and she was right! It is a Carolina Lily pattern on pre-printed tissue paper. I have done tons of paper piecing and usually really enjoy it, but this was quite a challenge. I have never sewn on tissue paper before and it was quite fragile....ripping easily. And the seam matching was difficult. I had to sew a main seam twice, and even then it didn't quite match up. I'll try to fix it with a green marker! The pattern had 24 blocks in it, and since the first one took 3 hours, I'm guessing I won't be making all 24 blocks!!

After supper on the second day, I took out the guild Blocks of the Month from October, which were blue 9 patch blocks with a white centre. I cut the blocks into 4 equal pieces, an idea which I first saw on the Quilted Forest website for a mystery quilt. Then we had a chance to play around with possible block layouts on the design wall. By the time all the blocks were ready (one had to be re-sewn to be the proper size and two new blocks were made to make the number of rows we wanted) it was getting late, so I selected the layout that had the fewest number of seams to match, and the easiest construction requiring the least amount of brain power....which was the bottom right layout. A big thank you to Barb for all her late night help with the unsewing, and seam pressing.
On the morning of the third day, I started a quilt-as-you-go project to try and make a dent in one of my scrap bins. I used 6 1/2" pieces

of leftover batting, a variety purple pieces for the backings, and made one half of the block dark scraps and the other half light scraps. I only got 14 blocks finished before it was time to pack up and go home. I'm not sure I like the black and white pieces as they really jump out at you...I might remove those. But it is looking like a happy quilt and will be a good demo piece for the guild "newbie day" demo.
So those are all the projects I worked on at retreat. My next blog entry will be on the downside of quilting retreats....believe it or not, it's not all good!
Posted by Quilter Kathy

Thanks for leaving a nice comment on my blog. I am impressed by how much work you acheived in one retreat! And you inspired me to try the bargello - one more on my to do list! The quilt as you go is very nice. I think the black and white offset the colors really nicely. I have found myself to focus on contrast lately, as a key to bring a quilt alive. Keep quilting!