News from the Groundhog and Rose Marie!

Well, our infamous groundhog Wiarton Willie predicted an early spring for us. I hope he's right! 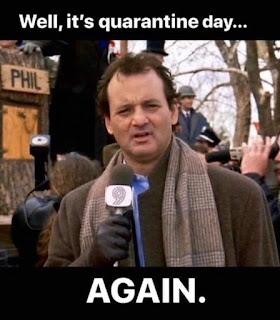 It's a weird game we play with ourselves because at the beginning of February, having 6 more weeks of winter would take us to mid March, which would also be considered "an early spring"! So it's that old saying "6 of one or half dozen of the other"... which means it doesn't matter either way! And also we have had snow in May before, so the whole thing is just silly. But all of that aside, here where I live, there is a lot of conversation about what the groundhog says! 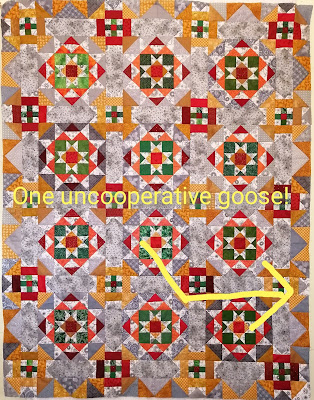 And in other timely news... I got a message  from Rose Marie today who told me that I had a mistake in my Grassy Creek mystery! On the bottom right side there is a flying geese unit that is not flying correctly! Thanks so much for your eagle eyes and now I will be able to fix that before it gets quilted in permanently.

Oh, I would not have noticed, but good you cought it before quilting.

The only reason that we make a big deal about Groundhog Day is because it is Mom's birthday. She turned 91 today.
Whatever the Groundhog does or doesn't see has no bearing on our winter, but it is a fun tradition. :)
Wow--someone had very sharp eyes to catch that mistake!!

Rose Marie has great eyes and powers of observation. I would have never noticed.

Wow that was a great pick up...

That was a great catch on that wayward goose! I wondered if Phil would even make an appearance this year with the virus! 😂

So funny! We were just talking about the groundhog conundrum last night! Normally I like a nice long winter - this not so much! I can't believe she spotted that mistake. Perhaps that goose was trying to tell us something?

Up the creek without a paddle cause you were following that wayward goose!!

It was a sunny day here, and for the only time ever, I was hoping for no sun so the groundhog wouldn't see his shadow. He didn't, but I have no idea how he could have missed it!

I did spy the errant goose, but Rose Marie had already mentioned it, so I didn't think I needed to pile on. Good thing it's right on the edge and an easy fix. I was annoyed that half the group in Punxsutawney
weren't wearing masks as they laughed about the groundhog. I guess they must be Pennsylvania Republicans. The groundhogs here in western New York are smart enough to remain in their homes hibernating.
Pat

Good spotting y your reader! Better to fix it now, as you day.
Dont know anything about ground hogs, living way down in the Pacific as we do. But I understand that the pronouncement is taken very seriously.