I said in my blogpost on Saturday that I would report on the quilt auction on Sunday, and now that Sunday is almost over... I better get typing!
I took a little video at the auction but I can't figure out how to upload it to my blog, so I'll keep working on that.
In the meantime, here are the photos. This is a shot of our group quilt being auctioned: 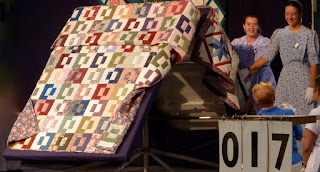 It was quilt #17 (of almost 220) so it was auctioned early in the morning and the crowd was about half the size it is around noon. But still it sold for $400 and we were happy about that. To read more about the above quilt - click here.
This was the first look I got of the basket block quilt...isn't it wonderful!?! 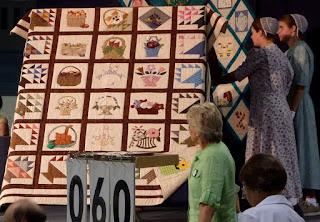 To see the blocks I made for this quilt - click here. This was a challenge for the quiltmakers to set together the great variety of blocks they received...some were set on pointe and some not.
The basket quilt was # 60 at the auction and it was sold for $1,200!
The highest selling quilt this year was this a block sampler quilt: 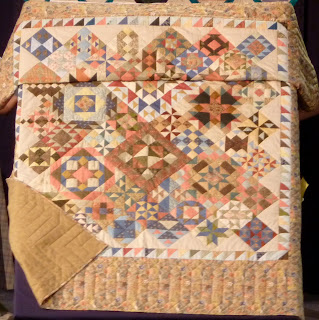 It was sold for $6,400! This seems like a lot of money, but relative to other years it was "low". You can read my report from the 2008 auction here  (highest selling quilt was $25,000) and the 2009 auction here (highest quilt was $7,000).  Every year we say that the prices are lower and the crowd is smaller, because we were very spoiled by the most exciting quilt auction in 2003, when the highest selling quilt went for $44, 000!! Click here to see that one.
Now it is time to start planning for next year's donation quilt!
***Update....I read in Monday's newspaper that $115,000 was raised at this year's auction.
That sounds fabulous until you compare it to last year's report that stated $320,000 was raised by the quilt auction. It wasn't just my imagination that the crowd was smaller and the bids were lower. ..I guess the economy is really taking it's toll on this event.
*****Tuesday update...apparently the newspaper misreported the amounts brought in. In this article, they must have been referring to the total amount of money raised by the event last year, not just the quilts. This year the quilt auction total was just $500 less than last year, which is good news for relief efforts of the Mennonite Central Committee!
Posted by Quilter Kathy

It is amazing to see quilts auctioned for that much money. The $44K quilt is simply amazing. It must be exciting to be part of an auction like that.

WOW is not even enough to exclaim how beautiful those quilts are. So exciting to see them. I hope they all went to good homes. Thanks for sharing.

What an incredible event this must be! Why do you suppose the crowds are diminished?