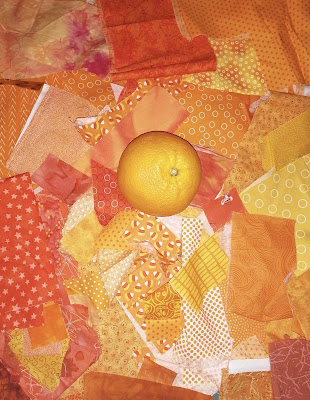 September is orange month at the Rainbow Scrap Challenge and I have dumped some of the orange scraps on the cutting table. I tossed my snack in the middle because it made me smile... an orange in the orange! I  determined which of my projects need more orange. 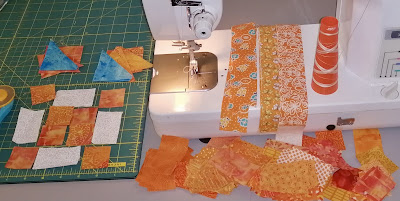 And then I started cutting and sorting and planning... and using up another cone of Aurifil thread!

Linking up to the weekly scrappy party at Angela's 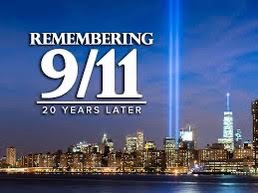 Today I hope to watch some TV coverage of the 20th anniversary of 911 if I can summon the courage, and will distract myself with some soothing sewing.
Posted by Quilter Kathy

Your blocks are cool in orange colors, Kathy.
Love the 4 fishes.
9/11 is a day that will never be forgotten. :(

Don’t lose your orange in the middle. 911 was so tragic. Can’t believe it was 20 years ago.

orange is such a fun color to work with.
We've been watching 911 documentaries. Difficult, but good to honor and remember what happened.

While I won't be watching the news coverage today, I don't think I'll ever forget where I was when the towers went down. The few news clips that I saw about the anniversary stirred up the emotions of that morning from 20 years ago. What a horrific series of events!

Your orange fish in their watery blue background are so fun! Orange is a really appealing color!

I like orange. I won't be watching any coverage today (TV with DVD player, but no cable in the sewing room). We've been talking about 9/11 for a few days now.

Love the 4 "goldfish". They are so pretty in their blue ocean. Orange is a favorite of mine. What a fun thing to have a month designated for playing with it. :)

Such cool blocks. Orange is a perfect colour for the autumn.

I especially like your orange fishy block! I haven’t made one yet!

I love your "goldfish" in the orange, swimming in the deep blue sea! Bonnie's L&E blocks are so fun.