My design wall is a bit of a hot mess right now. I am trying to figure out how to put together my Grand Illusion mystery blocks. I sewed together the 12 inside blocks and have been trying to make border decisions this week.


The two major problems are: 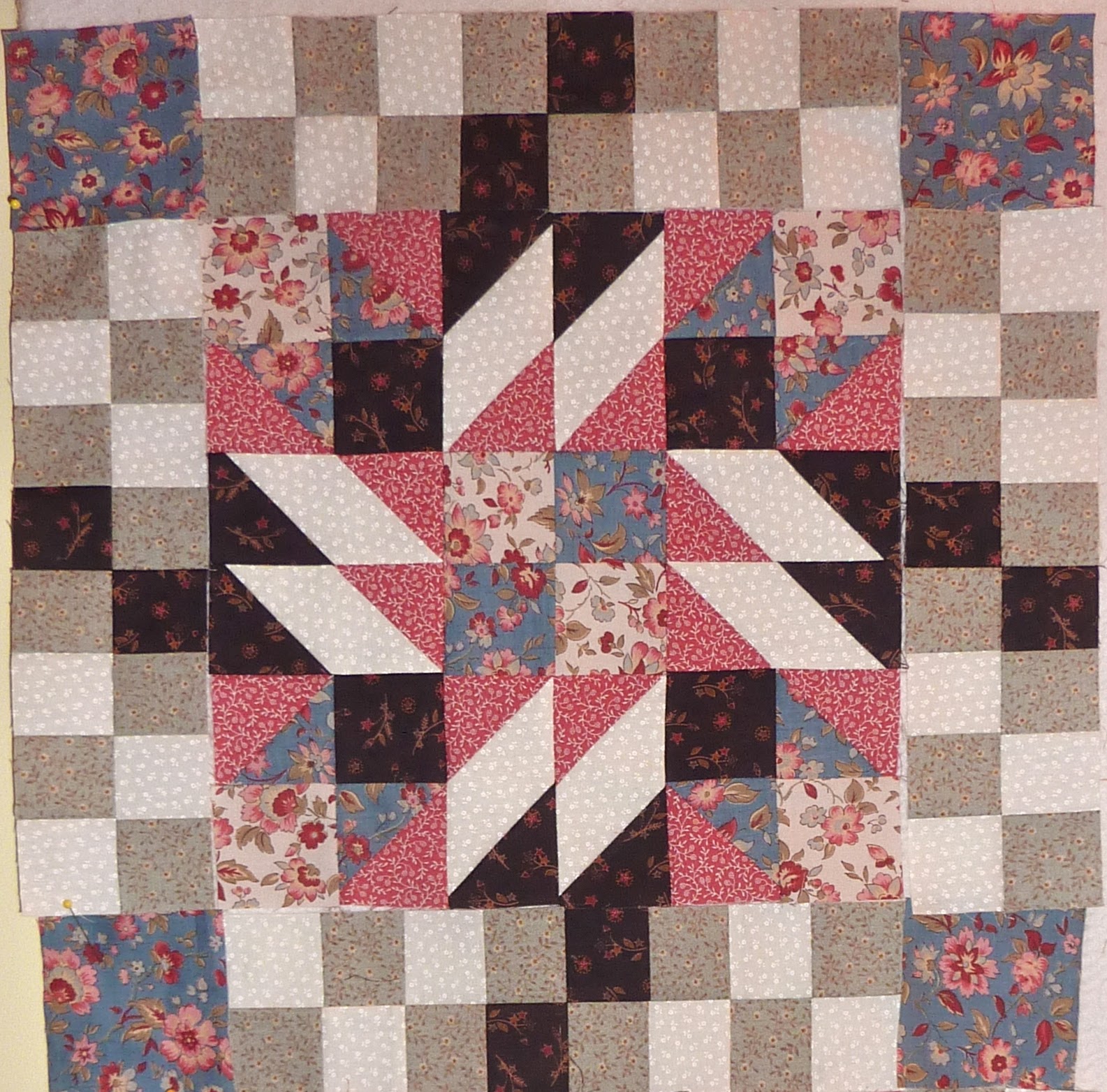 1. My green fabric was just not making me happy. It seems just too dull (maybe it's a winter related dislike?!)
And also I didn't like how the sashing looked butted up against the block. So I decided to remove those sashing strips all together. They will make an appearance in the backing!
Bye green!

2. Next, I couldn't decide what to use for sashing and which way to sew on the next border. Also I wanted the next border to be more centered with the blocks, so I tried out an extra border unit with a white square and two floral corners, which you can see on the left side of these photos.
Here are the narrowed down choices...


Cathy reminded me to chill out. She said:
"Agonizing decisions are for paying jobs, not playing jobs". So true! So I am not agonizing over these decisions, and telling myself that there is no wrong decisions, only decisions that help make me like this quilt more.. or less.
Do you have any feedback or ideas to help move in the right direction?
Posted by Quilter Kathy

Oh that is a tough one. I like the blue which plays off the center four patches better than the blue. But then the brown is so dramatic. As to the border in or out I would have to see both ways up against the one border to make a better decision. But it is fabulous.

Perhaps border blocks with black outside/pink inside but against black sashing (not black against black)??
Or when turning the pink geese inside, but against a cream sashing, like the cream you have in your blocks??
I like a lot the inner assembling of your blocks!
Best wishes!

Your quilt is stunning! Love your fabric choices and all arrangements work well!

I thnk I like the extra border pieces you added, but up against the dark brown sashing, not either of the two you showed. I don't like the sashing blending with the blocks in either the border or the center as the very light one does, and the blue sashing just doesn't do anything for me. If you use the dark brown, the border blocks should be turned with the pink in.

I really like the efffect you got where your blocks joined.

For what its worth, I prefer the blue sashing, but I would like to see the border blocks turned with the pink edge butting up against the sashing as Krista suggested. I think the black sashing is too much of a contrast with the blocks themselves. But then I do like blended quilts.... What ever you choose the quilt is lovely, and you have put a lot of work into it.

you just need to put on your big girl panties and make a decision :)
I like the black sashing btw, the outer blocks doesn't matter

Have you tried a pink inner border? For mine I pulled out one of the strong colors in the blocks, black. Have FUN deciding.

My 2 cents ;) Black sashing with the pink up against it. That one just frames it for me but it is your quilt.... do what makes you happy! Good luck with your decision.

I will be facing this soon as my GI is not put together yet. I like the first picture with the floral border and the pink touching it. It kind of makes the blocks float.

I like it much better without the green and as far as I can tell looking at pictures I like the blue border the best.

I like the floral sashing...it makes the blocks float. The outisde border face the blocks with the black out and maybe a final black border and black binding!
I wasn't crazy about the sashing either cause it was the first time the (in yours green) appeared but once I got the whole top together it didn't look too bad! As soon as I get it quilted I will post it on my blog!

I like your quilt the way you did it with the colors you've chosen. Not near as busy.

And you will hate me - but I don't even care for the pieced outter border as it just isn't the same design flow as the center. I like the blue - maybe a flange with the dark and wide blue border with the dark binding.

Have you considered using the sashing pieces as one of the borders?

I like the Floral inner border too. The border blocks make a nicer statement without the extra white. Maybe just put them on the top and bottom borders to make it longer...Linky Party next, week so you have time to play some more. Mine is being worked on later today and tomorrow. Gotta get one of the 2 smaller quilts to "flimsy" for the Link-up on the 30th

You can hate me, too, but I think I agree with Sharon, as far as the border pieces go. : )

Very pretty - I really like your color choices for this quilt.
Congratulations on a wonderful finish!

Whatever makes you smile, do that! :)

Go with what pleases you. Put it aside for a day or two, come back and something grand will happen :)

I like the black border. It stops the inner quilt and gives the pattern a rest. It could probably be a dark brown, which would look good with the pink. I like the blocks facing out, but with the black inner border that might not look as good. There's my two cents, for what it's worth. However, whatever you choose that is a gorgeous quilt!

The stars do seem to float with the blue inner border - they kind a little lost with the darker brown. And I'm liking the outer border on the left as well. I agree with 'Art by Rhoda Forbes' about putting it aside for a day or two, sometimes just overnight ('sleeping on it') can give you a new perspective.

I like the blue floral as the border and the black on the outside.