First, the good news...I have finished sewing my Double Delight blocks together and here is th 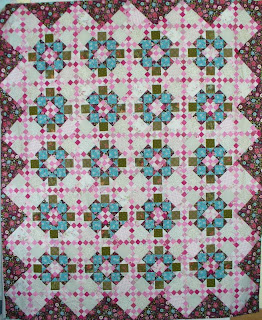 e quilt top so far!! I was really impressed with how the rows fit together, all the seams locking perfectly, and the whole quilt top was truly a delight to sew.
Now the bad news....since my creative self changed my version of the Double Delight design (without my permission!) to make the 9 patch blocks on the edges, I had at least 10 of the Rolling Star blocks left over. And since they took forever to make, I figured I had to find a way to include them in the quilt. I thought I might sew them into the backing, or make another smaller quilt.
But no...I just couldn't let go of the idea of sewing them into the border somehow. So I spent all of my sewing time on the weekend (I am not kidding...it took me hours!!) chan

ging 4 of the Rolling Star blocks into star blocks -without the rolling part!! But because of the way the blocks were constructed I had to pry open the ends of 16 seams on each block and then re-sew the two sides of each star point! Stupid idea! But once I started and realized how long it would take, I couldn't convince myself to stop! So I finished reconstructing 4 of these blocks for cornerstones on the borders.
Then I had to figure out the fabrics for the borders and tried a thousand (perhaps a slight exaggeration) combinations. Finally I decided on my favorite borders and started cutting only to discover...you guessed it, that I didn't have enough of the teal fabric left for an inside border! More bad news! I flopped around and moaned and complained for a while, and thought about starting over on the whole border idea or skipping the borders altogether, but I was already too far into the cutting of the teal and the floral fabrics to start over without wasting fabric. And it is no longer an option to skip over to the quilt store and pick out some new fabric...I am a committed Stashbuster with a serious fabric storage problem and I am not buying anymore (until I go to Paducah and then I am totally having a fabric buying binge!).

So instead of 2 borders (teal and then brown floral) I cut the teal in half to have enough to go all the way around the quilt, and then had to add a 3rd border of raspberry to make up the measurement...UGH! Here is a photo of my original border idea.
Now I am not a border person...it's usually the time when a UFO suddenly appears because I get frustrated or don't have enough fabric left, or I get bored. But not this time because I am forcing myself to finish these borders if it kills me! Tune in tomorrow to see if I have good news or bad news to report!!
Posted by Quilter Kathy

It looks great! I too am up to the borders, now you are ahead of me but inspiring all the same! I can't wait to see what you wind up with...nice work!

I think the quilt is looking great so far and the end result will be worth the effort!

I am cheering you on. You can do it!!

Your solutions were good. My first thought was "cut the blocks" to make setting triangles and corners. I cannot remember the name of the quilter/author who cut blocks in half and in quarters for borders. I have the book, but I'm at work so can't look it up.

WHEW, Ihope that I do not encounter such an ordeal with my DD borders, you are one DETERMINED woman!
Roslyn

It looks great!!! Can't wait to see it with the borders all finished.

I am jealous that you are going to Paducah!!!

Lot of work, but wonderful quilt!
Love your colours
Hugs from France

I've enjoyed seeing all the versions of this pattern and yours is gorgeous! I get stalled with borders, too, so know how you feel about them. Once I do get them done, I ask myself 'why' afterwards. Silly thing those borders!

Oh, Kathy, I'm so sorry you had a frustrating week-end. However, I think the quilt is awesome with the new border combination! I admire your patience and persistance.