The beauty of Newfoundland

I have to show you a few photos of the great beauty of Newfoundland. 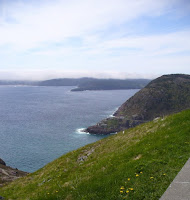 This is the classic view from Signal Hill in St. John's, facing the Atlantic Ocean. It was amazing how quickly the fog would roll in and you would only be able to see the grass in front of you!
It was cold in Newfoundland - I wore a turtleneck, fleece vest and winter coat for most of our travels. However, the good thing about the cold weather is there were lots of icebergs to see.
Icebergs come from the glaciers in Greenland and float to Newfoundland down "Iceberg Alley". Some years there are very few to see, but this year there was an abundance. If you 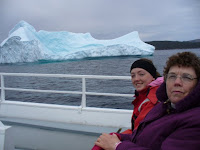 want to learn more about them or see incredible photos, click here.
The photo of my daughter and Mom on the left was the closest we were able to get to an iceberg. This was on a boat trip in Bay Bulls where there were several icebergs in that cove, but this was my favorite one. 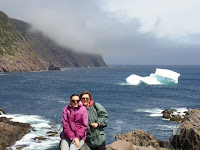 On the right is a photo of one of my favorite views on the trip. Taken at the Ocean Sciences Centre, with the fog rolling in...it was breathtaking. It was very windy (as you can see by our windblown hairdos!) and it was very cold, but we stayed a long time to watch this beautiful iceberg.

The photo on the left was taken at Twillingate and the iceberg looks small since we were so far away from it, but isn't the view spectacular??
And of course I really loved the rock 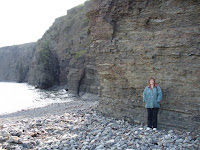 cliffs that surround Newfoundland...you know how I love rocks! (Visit my beading blog to see a 8" x 11" beaded piece I made based on Northern Ontario rocks). Here I am standing by a rock cliff at Bell Island. I have lots of photos of rock, but I'll only show you this one!
In the next post I'll show you some of the wildlife we saw.
Posted by Quilter Kathy

What stunning scenery. Fancy seeing an iceberg! How wild and beautiful, I should love to be able to visit Newfoundland.

I'm so jealous. that's the one place that I'd really like to visit. Maybe one day I'll get there.

Beautiful scenery . . . thanks for taking us along on your trip *s*

What a beautiful place. It must have been wonderful to travel with your mother, daughter and sisters to such awesome natural beauty. The quilting classes sound great too, but I'll bet that getting home was one of the best parts of a terrific trip.