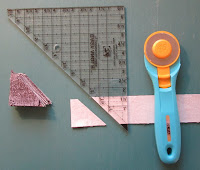 A couple of months ago I bought an aqua "Splash" Olfa rotary cutter which has a new system for replacing the blades in order to reduce the probability of cutting yourself during the process. Okay, so this product was actually "new" in 2013, but it's new to me in 2017! 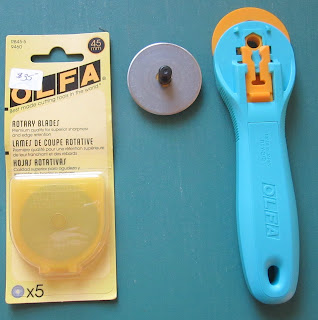 I needed to cut bazillions of triangles for Clarissa and the Bear so I got out the new rotary cutter. And somehow I got a nick in the very first blade of my new rotary cutter. I have no memory of cutting anything other than fabric. I am very careful to always keep the safety shield in place when I set the cutter down (since I have seen terrible injuries of quilters accidentally cutting themselves) so I really have no idea how the nick happened.
The blade was really sharp when I started using it, but after a few cuts it was missing threads consistently. I was able to easily replace the blade and think the new blade replacement system is great.
However, I do hope that this new $7 blade lasts longer than a few cuts!
Here are my questions:
1) What do you do with your old/nicked/dull rotary blades?
2) Do you get them sharpened?
3) Have you had any experience with using the blade sharpeners yourself? Is it a good investment?
Posted by Quilter Kathy

I do sharpen my blades. It gives them that little bit extra life. I store as many old blades in the plastic storage container. When they are full I tape them securely closed and put them in an empty jar with the lid closed tightly and taped again. Then in the bin it goes...

I got one of those Splash cutters too and I love it. The handle has so much more control for me. I hope yours just was a bad blade, did you contact the company to see if they would help out? Maybe it was defective?

I throw mine away, but not until they have cut a million cuts, LOL! I always love the day when I finally change the blade.

I've read a suggestion of taking them to your doctor's and having them put the blades into their sharps container.

I buy my blades on eBay for pretty cheap I'd cry if I had to fork out big bucks. They were cheap enough that I thought I'd give them a go.

I have an empty Altoids tin that I use for bent pins, dull needles, and old rotary blades. I taped a label to the top that reads SHARPS and when it is full I'll tape it shut and dispose of it. (I do not sharpen dull blades - not effective enough to bother with)

I find that some cutting boards dull the blade faster than others. I'm researching which is the best. I'm not good at tracking. I have a manual sharpener that will sharpen the blade somewhat but the edge doesn't last very long. I keep the plastic holders that hold the blades and mark one as "used" for the old blades. It will hold quite a few. Tape it up and dispose.

I find this very interesting as I have opened a pack of 10 branded blades and 6 had nicks. unfortunately I had bought them too long ago to have any recourse to the seller. Strangely enough I am presently using a blade which missed a thread, but eventually it stopped doing that? I have useda blade sharpener, not really impressed, but maybe I was too optimistic it would cure the nick. I am going to try the cheap blades next. Our sharpening service, who take care of our scissors, also sharpen blades, but not tried it yet.

I bought a blade sharpener and it was terrible! I returned it as soon as possible to get my $40 back. I get nicks on blades too, and have no idea how. Enjoy the new cutter!

I have that same cutter, with the same problems. I do keep my old blades, and, when I get enough, I give them to my son, along with the hand held sharpener, and he sharpens them for me. It works fine. Not quite as sharp as new, but, still sharp. Also, I'm lucky that a friend goes to the PA quilt show every year, and gets 10 new blade for $18, for anyone that wants new blades.

I had a problem with a new Olfa blade missing threads. Was quite disappointed as it was brand new. It turned out that there was a sticky substance on the back of the blade that caused it to stop rotating for a flash of a second. Once I removed the substance & the blade could rotate freely, it was perfect.

SO frustrating to get a nick right out of the gate. I save my old blades to cut paper with. A few months ago I bought an electric sharpener but I can't say I was happy with the results. Maybe it was user error. I'm going to give it another try and see if I can get better results. BTW, I love that cutter and blade replacement system too.

I've tried two different blade sharpeners, one manual and one electric, and I don't think either of them were worth the money. They both sharpened the blades, but the blades got dull again within a few minutes. Not worth the time or expense.

I haven't had luck with sharpening the blades. I just figure that the cost of the blades is worth not having to cut that fabric by hand. Imagine how often we would be replacing or sharpening our scissors!! I got a sharps container from my doctor a few years ago for my old blades and still have not filled it.

I tried a sharpener for the blades and was unhappy with the results. I have two rotary cutters. Whenever I change a blade, I use the new blade the cutter than I use for fabric and use that blade in my other cutter that I use for paper piecing. Then that blade goes into an old blade container marked DEAD.

That is my favorite cutter. I usually recycle my blades in the steel bin.

I was really interested in reading the comments on this post. I am a new quilter, though I have used a rotary cutter for other sewing projects. I have not bought the "new" type cutter. But I did buy a blade sharpener and had absolutely no good luck with it. I thought it was just me. After reading comments, I don't feel so bad.
xx, Carol

I found that my blade sharpener didn't!!--sharpen that is!! I just throw the old blades out (I know what a waste, huh?) and get new ones--I hate changing blades--just so afraid (after my one session where I really sliced my finger!! What a klutz!!) to hurt myself again. There used to be a mail order service you could send your dull blades to, but haven't seen one lately...hugs, Julierose (p.s. be careful...;000)

I buy blades in packs of 10 from Amazon. In the US, they sell 10 blades for $29.99 with free postage. Look in Tools and Home Impro rather than quilting.

When was the last time you changed your cutting mat? I had a blade that was iffy and I went to a friend's house and used her mat. She hardly ever uses it and my blade cut through very easily. I bought a new mat the next week

Forgot to add that I have a hierachy for blades:-
Fabric,
Wadding,
Vinyl
Paper/Card

Then they get put in an empty altoids ten with old needles and pins and taken to the sharps disposal at the chemists/pharmacy.

I store my old blades in one of those yellow cases they come in,till full and then dispose of them safely. I have access to a hazardous waste depot that takes sharps.At a guild I belonged to one lady was pretty good at sharpening the blades but it only prolonged the life of the blade a bit. If you aren't handy with the sharpeners you can create a flat spot on the blade which is like a nick in the blade. I would source out a cheap place to buy olfa blades and chalk it up to the expense of quilting!

I love my aqua Splash cutter but after making a bad experience with the expensive brand blades I now buy them form amazon and I think they are as good as the brand just much cheaper. Now I just have to remember to change my blade;-)

I am with Dona. I have noticed that my blades don't last long on the old, overused mat. When I tried the same blade on the newer mat, it was slicing like a charm. I keep the old mat to cut batting now along with older blades. I do sharpen my blades. I can get a lot more miles on it that way. I believe it is worth the investment and I probably cut a 1/4 of what you cut. An electric sharpener is on my wish list now. ;^)

I was gifted an electric sharpener a few years ago. I think I took it out of the packaging last year and found a spot for it, but I have yet to try it.
My old blades go into one of those yellow cases in which the Olfa blades are sold. I label it "Used" and tape it up to dispose when full.

I put my old blades, needles, pins into an empty prescription bottle well labeled. I've yet to fill it completely but will eventually tape it shut and put in the trash. I purchased a new Olfa mat last year along with one of their ergonomic cutters and found the new mat made a huge difference in the longevity of the blades. My old mat was over 30 years old! I also have an old hand operated blade sharpener purchased many years ago. It extends the life of a blade a bit and it didn't cost that much at the time, so I do use it. After the blade is sharpened a couple of times it doesn't seem to hold a good edge for very long though. Before putting the older blades into the 'prescription bottle' I put them in an old cutter marked for paper only and use it further that way before finally disposing of them.

I was at a workshop once and the instructor suggested using a magnet (the flat kind that has advertising) to move your blade when changing it so you don't cut yourself.

I tend to wrap my old blades up and put them in the bin carefully wrapped so no one can get cut but a friend bought an electric blade sharpener to out MQG last month which he says is very good, have a blade I have just replaced so will take it and try the sharpener out at the next meeting but went over a pin so it might not work

I also save my dull blades in the original package and use them to replace my the rotary cutter I use for scrapbooking. I like the idea of taping the container shut before tossing them. On a side note, my husband drilled a small hole in the top of a child-proof prescription bottle for me. I toss my bent/dull pins and needles in there. Thank you for sharing!

I buy cheap blades. Here in AUstralia they are 3 for $10 as opposed to $14 each for an Olfa blade. The cheap blades fit my olfa cutter, and when they are finished I sticky tape them up in the old packet and throw them away. I can change my blades whenever I want to. Even if I have just accidentally ran off the edge of the cutting mat onto the table which puts a nick in it.