The first quilt I ever owned was given to me by my mother-in-law and is a dresden plate - you can see it on this blog post. I love that quilt and have used it for almost 28 years now! I have always thought about making one, and when Anne from Bunny Hill posted about a Scrappy Plate Club, I was really tempted to join in. But I just could not allow myself start another quilt project (demonstrating amazing self restraint for a quilting addict)!

Then I found Lurline's tutorial for a scrappy dresden block and decided that I was going to try "just one" block for my guild's quilt show challenge.
Here are the two challenge fabrics that were to be included in each quilt. I decided it would be fun to challenge myself to try to make these challenge fabrics play nicely with my bright Kaffe Fassett scraps. 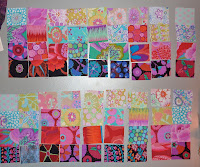 I had a great time cutting out scrap squares and laying them out from dark to light in groups of 4 to sew into blades like Lurline did. 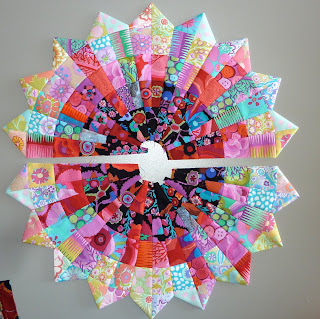 I didn't have the ruler that Lurline recommended, but I had one that looked similar so I tried it. It didn't work out as well!  On Lurline's block she had 20 blades, and on mine I needed 36 blades to complete the circle...whoopsy, a slight math miscalculation! So I made 16 more blades and sewed them together in pairs to see if that would make a complete circle, which it did. But then there was a very large hole in the center of the plate. So I sewed an extra black piece on the bottom of every blade pair and that worked. 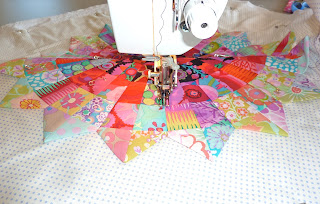 What to do next?!? I picked a background fabric, pin basted the plate to it, sandwiched that to the batting and backing,  and then quilted on the straight line seams to fasten the plate to the three layers. 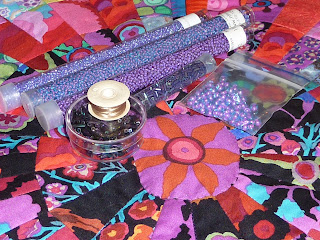 Then I appliqued a circle (which ended up to not be very round?!?) on top of the hole in the center, and added some beading to sparkle it up a bit.
What did I do next?!?
This post is getting long so I'll write about how I finished the quilt in tomorrow's post.
Posted by Quilter Kathy

How beautiful! I am anxious to see tomorrow's entry..I am sure you will have a lovely ending:)

Beautiful dresden and the flower in the center circle is perfect!

Oh, sure. Just leave us hanging like that! : )
That is an amazing plate block. I have never seen one with so many pieces in the blades. It is incredible. Now, are you tempted to do a whole quilt?

That is one gorgeous block! I'm not a huge fan of dresden plate, but this one definitely makes me reconsider that. Beautiful.

Wow! That sure ain't my grandma's Dresden Plate! I love the piecing, the fabric choices. VERY cool!

Love the pieced Dresden plate. I have a quilt show that week-end as well. Our Challenge this year was Flying Geese, but I have, as usual, procrastinated too long and don't have my project even started.

Very interesting version of a Dresden plate....I am looking forward to the....to be continued.....portion of this post. :-)

Wow! I have never seen a DP like that. You plate is just gorgeous! Can't wait to see how you finished it.

Oh my Gosh that is a gorgeous block-I love the scrappy blades.