The block at Friday Block Party last week was called Louisiana, but it looked like pinwheels to me. I used to love pinwheels as a kid and decided to make the block in miniature size. I dug around in my scraps, which are not organized and manicured like the quilters I envy who post on the Stash Manicure blog.

I found a baggie of rectangles that I received from someone (I think it was Helen?) at last year's quilt retreat, probably after I started shreaking "you're not going to throw those in the garbage are you!??!  It may even be possible that I was not "given" them, but grabbed them out of the garbage... I really am trying to stop that bad habit!  The size of these rectangles was 1 1/2" x 2 1/2" so that was the size my flying geese became, which made the blocks 4" finished. This is a photo of when I was playing with the colour groupings.
Then I dug around in my scraps.  This photo is a little blurry because I was excited, and as you can see for yourself...when I say scraps, I mean scraps! 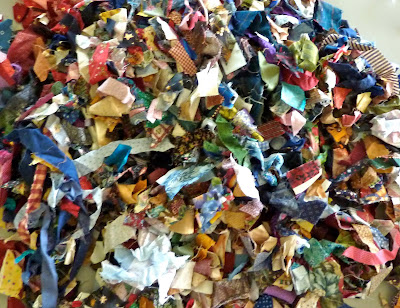 Again, I do not store my fabric like other quilters (whom I want to be like when I grow up).  I dumped out my scraps (stored very carefully in a Mary Maxim bag that I received from Sandy) and I picked out a few other pieces to fill in the colours I needed. This took a couple of hours (no kidding!) because I love digging around in there and seeing all the treasures. I got distracted and (in my mind) started several other projects from these scraps before I emerged with the tiny pieces I used!! 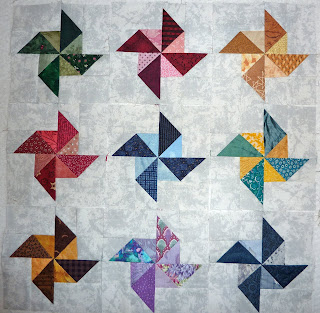 And after some cutting and sewing, these are the blocks I ended up with. There are a couple of repeats, but most of the blocks have 8 different scraps and I think I counted 71 different fabrics that will be in this 12" mini quilt...how fun is that?!?
Posted by Quilter Kathy

If it makes you feel better all my scraps are in one big box. I love sorting through it to find fabric. I keep saying that I'm going to get organised aswell but I don't think it'll ever happen as I enjoy the rummage too much

they are darling, and well worth the time you spent digging!

Kathy, I'm in a constant battle to keep my scraps in some semblance of order. Connie and I have known to dumpster dive at quilting retreats for fabric that is tossed. Some people just bring over their scraps now. Love your pinwheels.

those are adorable pinwheels--worth the digging!

Highly adorable. Isn't it amazing what what can be made with the tiniest of bits? It is reassuring to know that we could all keep sewing for years and years even if new fabric become unavailable for some reason. Your little pinwheels are well worth all the time spent digging.

Nice pinwheels! You must have lots of scraps to come up with 71 different fabrics in a 12 inch quilt!

the pinwheels are looking great.

I want to play with your scraps, too. Must be the remains of lots of interesting fabrics in there.

I do believe you were having scraps of fun!!! LOL Love the blocks.

Kathy! This is fabulous!!! This post makes me LOL, we are so much alike. I now have friends that save their scraps just for me. I can't wait for retreat to see what I can bring home. :) I think I may have to copy this one.

Cute pinwheel blocks. I like to jump in your pile of scraps...I love to work with my old scraps too.

Reading about digging in your scraps and pinwheels prompted me to make some of my own (ok, only 2 so far, but I have hopes for a dozen to make a small quilt for the guild auction).

My scraps are a disorganized jumble like yours -- and I love opening the bin they're in just to see the riot of colours!